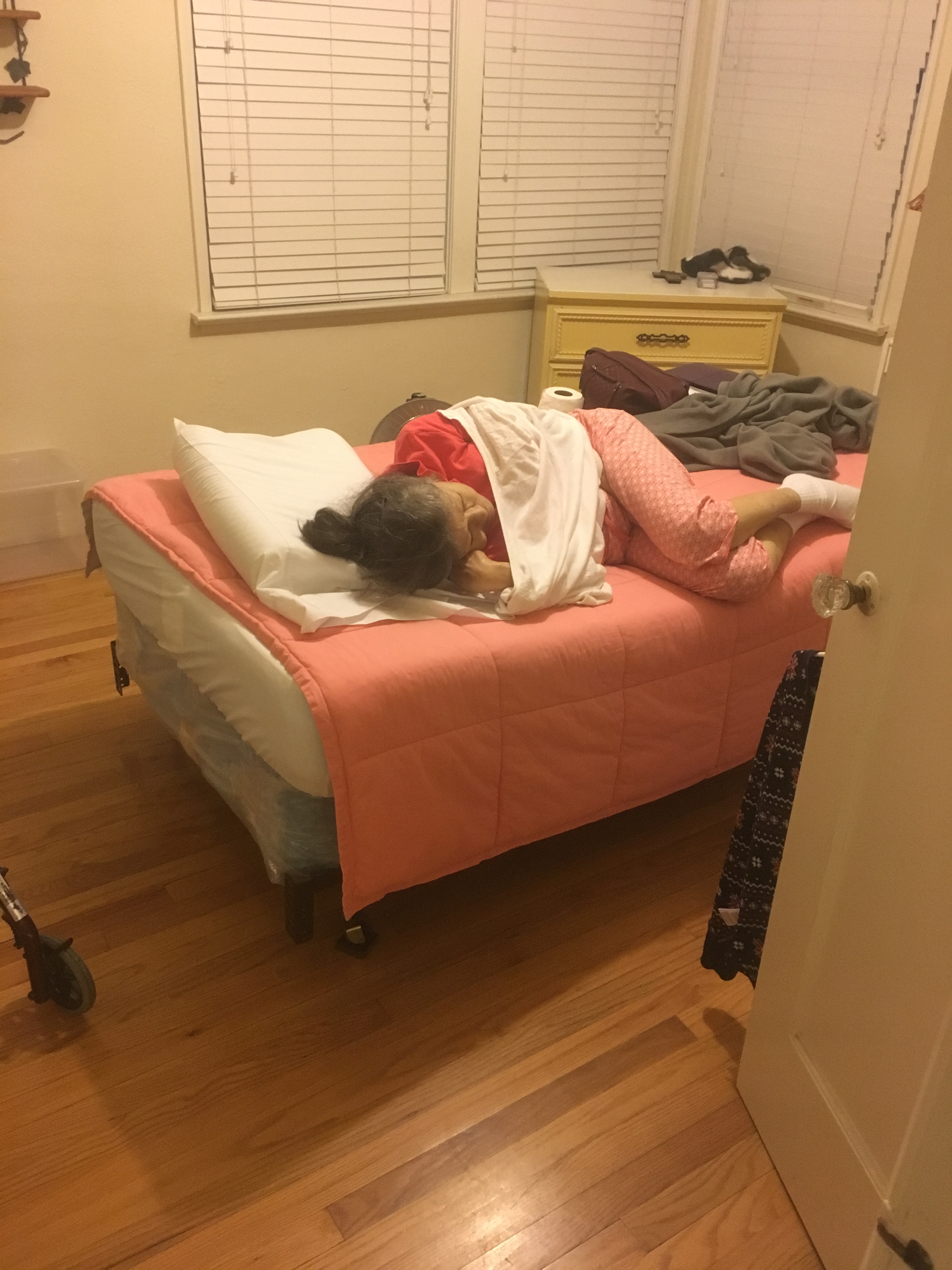 For three months, I had been waiting to enroll my mom into a county mental health program. I wanted to do it much sooner, but we had to wait for my mom’s Medi-Cal to officially transfer from another county. Dealing with slow government bureaucracy has been a constant frustration.

The program is coordinated, intensive outpatient treatment, typically referred to as a Full Service Partnership (FSP) in California. I didn’t have a lot of faith in the program, since outpatient treatment has never proven successful for my mom in the past. At most, I was hoping we’d get lucky with a decent treatment team and I could get some help in coordinating and monitoring her various physical/medical needs.

As it turned out, we wouldn’t even get our feet in the door. My mom would be outright rejected at the assessment. After about forty minutes of questions pertaining to personal and family medical history, the clinician suddenly asked my mom if she had a mental illness AND whether or not she wanted to access county MH services. Flabbergasted, I thought “What the hell?! Surely this MH worker knows that there are people with mental illness that don’t believe they’re ill!”

Predictably, my mom became agitated and, as she is prone to do, started talking openly about how her spiritual visitations are real. After a few minutes listening to my mom and trying to calm her down, I asked the clinician as to why she would ask my mom those questions. She responded by referring to the notion of “informed consent” (i.e. voluntarily agreeing) and how that requires her to be completely truthful to my mom about what they do. She then went on to explicitly say that she cannot enroll my mom into the program, unless my mom answers in the affirmative to those questions.

I was furious, but in as calm a manner as I could, I expressed my immense disappointment with her approach. Among other things, I told her if that was county policy, it was misguided and that there are more tactful, sensitive ways to try and help people like my mom. I walked out a minute after, as she continued to ask my mom questions and fill out forms.

Just more damning proof of how the MH system is setup to deny the most seriously mentally ill help, I thought. It hasn’t always been this way.

In 1963, President Kennedy asked Congress to spend $3 billion to replace state hospitals with a network of community mental health centers. The development of more effective anti-psychotic drugs seemingly made it possible for patients to return to their communities.

However, for nearly twenty years, no change occurred, due to political circumstances and events such as President Kennedy’s assassination. In the 1980s, though, numerous lawsuits against patient abuse in state hospitals became common. In response, courts passed a flurry of patients’ rights laws. Compared to before, it became exceedingly difficult to involuntarily hospitalize somebody. This negative publicity was all increasingly cash strapped state governments needed. They began to close state hospitals and discharge patients.

Patients’ rights advocates declared victory for what was being called “deinstitutionalization.” Fast forward some near thirty years later, though, and the money for community centers that were supposed to replace state hospitals has never materialized. Consequently, instead of adequate treatment, too many people who suffer from mental illness end up homeless, incarcerated or prematurely dead. This largely occurs due to the difficulty of being able to involuntarily hospitalize someone; but also because the psychiatric hospitals that remain are inadequately staffed and funded.

Despite the high economic and social costs this generates, the MH system is vehemently defended by various interests and groups, from directors in government on down to health care and social work professionals, to patients’ rights groups and many consumers themselves. Their political zeal in defending the status quo is matched by their ideological commitment to civil libertarianism, a view that prioritizes maximum freedom for the individual. In the MH system, this means that inadequate or no treatment at all for people with a serious mental illness is justified in terms of “freedom of choice” and “personal agency.”

I was reminded of this when my mom was hospitalized last December for congestive heart failure complications. I met with the hospital social worker to get more information on assistance in finding a residential care facility for my mom, in case we needed it. As those conversations tend to go, I brought up my frustration with inadequate care and treatment from the MH system. While expressing genuine sympathy to my family’s plight, the social worker didn’t mince words when she said that my mother had a right to refuse treatment. She went so far as to ask me what my mother wanted to do. I said what I usually say when I hear this: “She doesn’t want to take psychiatric medicine, but she wants to be with her family. We can’t live with her, unless she is stabilized, though.”

The ridiculous irony in what happened at the assessment makes the indictment of the MH system all the more clear. Setup, ostensibly, to respect and protect the rights and freedom of people, my mom was denied county MH services, which both her and I pay taxes for, because she is too sick to acknowledge she has a serious psychiatric illness. Her Right to health services was denied because she isn’t able to understand and reason sufficiently enough. This is the same system that in the past has deemed my mother in court to be mentally incompetent and in need of a conservatorship, due to her mental illness (Yes, I’ve been her conservator. That was a failure and a waste of thousands of dollars for me.). My mother’s health hasn’t improved since then. It has gotten remarkably worse!

Apparently, however, the clinician didn’t handle the assessment “appropriately.” Both the office manager and Director of Behavioral Health, whom I contacted out of my indignation, affirmed to me that a person does not in fact have to admit or accept they have a mental illness to access county MH services. While they assured me that they would help us if we decided to return to access services, I’m now wondering what their quality of services are like. Are other county MH workers as poorly trained or as bad at their jobs?

I also don’t buy that it was just a lack of judgment, frankly. The extreme commitment to civil libertarianism permeates every corner of the MH field. As the office manager admitted, the clinician was trained in an actual MH program at a school. In other words, she was taught and trained by people committed to this philosophy and in strategies and treatments that are by and large woefully inadequate for the most seriously ill. If poor judgment played a part, ideological purism helped  cloud it.

I’ll eventually try and persuade my mother to try and enroll again. I have no delusions, however, that she needs and deserves quality treatment in a psychiatric hospital or facility with compassionate, responsive staff and doctors committed to making her as whole as possible again.